Home Uncategorized Four Days Before The Bombing In Nashville Near The At&T Building, American...

We are going to file this as unconfirmed news, but it’s really strange that Edward Jones wrote a Facebook post four days before the bombing in Nashville that now could create a huge cloud of controversy and a lot of conspiracy theories.

So far we can’t confirm that any Dominion forensic contracts being handed out. Not sure if it makes sense AT&T would even do them or why machines would be sent to Nashville.

The independent citizen journalist Alexander Higgins Has reached out for comment to Edward Jones.

The profile pic has changed but the image that was in the profile is still listed in photos. This post could not be located on the timeline.

Alexander Higgins contacted Edward Jones and he confirmed that the post real. The post has been made private due to the attention it is getting. The author says Dominion machines being shipped to AT&T for forensic audit is an unconfirmed rumor but the post itself is indeed real.

With permission from the author, re-posting the author's confirmation this post is real. pic.twitter.com/p2vq8XARjx

Edward Jones wrote around midnight that he is leaving tow and once he feels safe he will re-activate the post: 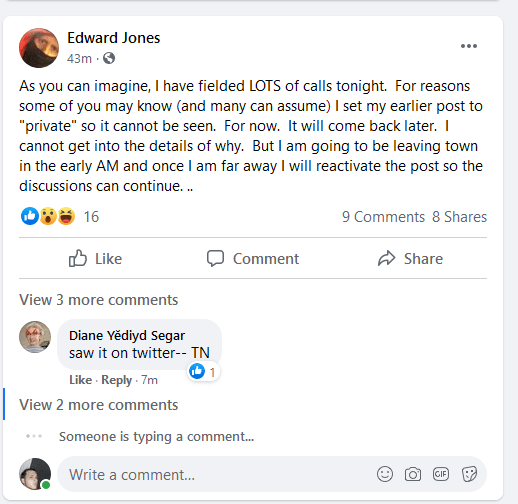 Take what you want from it. The timing of the post 4 days before the bombing is what strikes interest though.

We can only label this news as un-confirmed so far but come back later for more updates!

How To Have Effortless Conversations With ANY Woman... Guaranteed!

Bannon: What if we make Trump Speaker of the House in 2023 and let him impeach Biden for stealing the election?

Please Help US With This Fight for The TRUTH !!!

Fauci Caught Conspiring With Top Officials To Disqualify Hydroxychloroquine as a...

RI Dem Governor under fire after being seen at wine bar...

Nancy Pelosi Exempts Herself From Fine For Skipping Security Screening —...